Prometrium®, 100mg of micronized progesterone in a gel cap, is finally available in Australia.  This product has been used by the French since the 90s.  Progesterone is a relatively difficult hormone to get into the human body and rubbing on the skin in the form of creams has been shown not to be very effective.

Most sex hormones, including progesterone, are fat soluble and so the French company, Besins, basically micronized the progesterone (making the particles very small) and then dissolved it in sunflower oil, encasing the whole in a gelatine cap.  Clinical trials have shown that oestradiol used with Prometrium represents one of our safest HRTs. 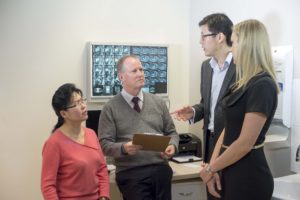 What does body-identical hormone therapy mean?

The term, “Body-Identical HRT” was coined by Dr Nick Panay in the UK, to include HRT regimens containing  pharmaceutical grade (tested) oestradiol with or without Prometrium. In contrast to compounded, hand-made, “Bio-Identical HRT” which is largely untested, Body-Identical HRT has been rigorously tested.

A recent meta-analysis (world review) by Dr. Asi (2016) has shown that women using oestradiol plus Prometrium have a significantly lower risk of breast cancer than those using HRT regimens containing synthetic progestins.

There are two ways to use Prometrium

Prometrium can be used orally or vaginally.

Most women will choose to take Prometrium orally.  When a continuous HRT regimen is desired, a Prometrium 100mg cap is taken about an hour before bed and swallowed whole.  When a cyclical regimen is desired, the dosage is 200mg swallowed whole about an hour before bed on days 1-12 of the calendar month.  The typical doses of natural oestrogen used with these regimens include oestrogen patches in a dose of 25µg-50µg daily, Sandrena Gel one sachet daily, or oestradiol orally 1mg-2mg.

The same Prometrium capsule can also be used vaginally, which would be advantageous for the few women who have side effects with the oral medication.  Essentially, the same gel cap is inserted into the vagina at night, where the gel cap melts and the sunflower oil runs to the back of the vagina.  Studies conducted in France have shown that natural progesterone is extremely well absorbed by the back of the vagina directly into the uterus.  This is so effective that in fact when Prometrium is used vaginally, it only needs to be used on Monday, Wednesday and Friday nights ie. three capsules a week separated by a day or two.

The combination of oestradiol with Prometrium, is one type of Body-Identical HRT. This therapy involves giving the actual natural human hormones and represents one of our safest HRTs.