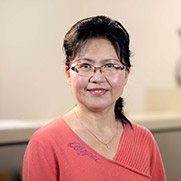 Dr Jinzhu Liu graduated from The University of Medicine in China with a MBBS, and subsequently graduated in 1999 from the University of New South Wales with a Master of Public Health. Dr Jinzhu Liu practiced medicine as an Obstetrician and Gynaecologist in China prior to arriving in Australia.  She has been involved in research for more than 15 years in Australia. Jinzhu currently manages the Barbara Gross Research Unit at the Royal Hospital for Women. Her research interests include: designing in house protocols, managing all aspects of clinical trials in women’s health, data analysis and presenting studies at AMS conferences. One particular area of interest is menopause.

Dr Liu has carried out a four part multi-ethnic group study involving Chinese, Arabic, Indian and Greek women living in Sydney. The findings can help women be better supported for the particular needs in the prevention and management of menopausal symptoms both with the community and by medical professionals. As a testament to their worth, the studies were presented at the Australian Menopause Society Conference as well as the International Menopause Conference. Additionally, Dr Liu has a number of publications in peer-reviewed journals.

Hafiz I, Liu J, Eden J. A quantitative analysis of the menopause experience of Indian women living in Sydney. The Australian and New Zealand Journal of Obstetrics and Gynaecology 2007;47(4):329-334.